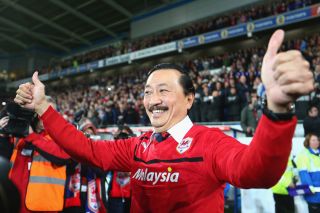 The 41-year-old saw his head of recruitment Iain Moody leave the club last week at the behest of Tan, but concerns over Mackay losing control of playing matters have been quashed following a lengthy board meeting on Monday.

The Premier League outfit confirmed on Tuesday that Mackay will have a 'Nomination and Corporate Governance Committee' to support him on all transfers, but the manager will make the final call.

"Its main responsibilities will be to support the manager, Malky Mackay, on all player purchases and sales.

"All transfer dealings will be conducted subject to the manager's final approval."

It was also announced following the board meeting that Tan – who took control of the Welsh side in 2010 – would be writing off £5.8 million of interest owed to him on loans he has given the club.

Tan confirmed that any future loans he makes to the club under £50m will be interest free, while Len Win Kong will leave the club having resigned from his role as a director.