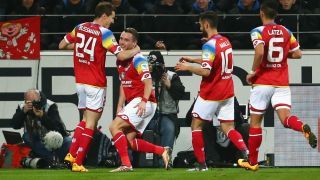 Gladbach came into Friday's meeting at the Coface Arena fourth in the table - the final qualification berth for Europe's premier club competition - but suffered a second successive defeat since the resumption of the campaign.

The winner came midway through the opening period as Jairo Samperio's fine individual run ended in a pass to Clemens, who was afforded space 20 yards from goal.

That proved costly for Gladbach, as Clemens' shot dipped over Yann Sommer and into the net.

Raffael had a glorious chance to equalise for Gladbach in the closing stages, but the Brazilian was denied by a stunning save from Loris Karius scrambling back across his line as Mainz climbed up to sixth and within two points of their opponents.