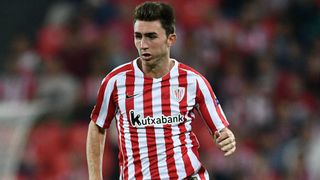 Pep Guardiola conceded there was still work to be done before Manchester City could bring in fresh faces amid reported interest in Athletic Bilbao defender Aymeric Laporte.

The runaway Premier League leaders, who travel to Cardiff City in the FA Cup on Sunday, are seeking to strengthen at the back and Laporte is said to have a €65million release clause.

Guardiola was probed on the topic of Laporte's potential arrival at his pre-match media conference on Friday, where he proved evasive.

"I know you are curious about it. Here is not the place to talk about it," said the City boss.

"Making deals is so difficult. It is not right place to talk about names.

"He's a player of Athletic Bilbao. You will know if it happens, if it doesn't, it won't happen.

"There were players in the past we were interested in, there will be in the future. We will try to do the best we can."

The Catalan also confirmed Kyle Walker would be fit to face Cardiff after an injury scare in the EFL Cup win at Bristol City on Tuesday.