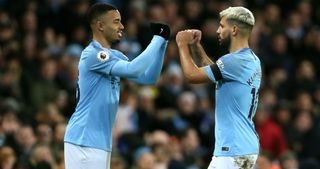 The pair helped Manchester City to win four domestic trophies last season, scoring 53 goals between them in all competitions.

Though reports had suggested both may be considering a move away from Manchester, Jesus told Sportsmail that it's unlikely either will leave this summer.

“I think it's out of the question that Aguero leaves and me too. He is a legend at the club - he's the top scorer [of all time],” said the 22-year-old.

“Obviously as a player I always want to play, but I'm happy to help and I respect Sergio.”