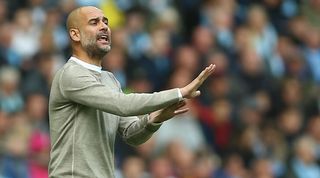 Pep Guardiola’s side have fallen 14 points behind Premier League leaders Liverpool, and the Reds could extend that gap further by winning their game in hand.

The Telegraph has reported that senior figures at the Etihad are planning on making between four and six signings over the next year to help refresh the squad.

Left-back and centre-back are the priority positions, after Guardiola was forced to select midfielders Fernandinho and Rodri in defence due to the lack of options following Aymeric Laporte’s injury earlier this season.

Villarreal’s Pau Lopez and Ruben Dias of Benfica, who are both 22, are said to be targets, although Guardiola has insisted no signings will be made this month.

Ben Chilwell of Leicester is City’s major left-back target, but the huge fee required to take him away from the King Power could make a deal difficult.

Other positions that could be reinforced are central midfield, with David Silva set to leave at the end of the season, and on the wing, as Leroy Sane could depart for Bayern Munich.

Mikel Oyarzabal of Real Sociedad has been identified as a potential replacement for Sane, while in midfield Atletico Madrid’s Saul Niguez is being considered.

Gabriel Jesus’ future is also in doubt and the club are looking at striker options, with the Brazilian struggling to convince senior club figures that he can become the natural successor to Sergio Aguero.