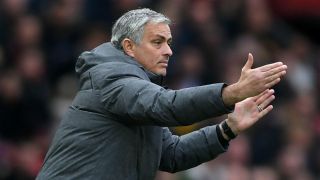 United tightened their grip on second place courtesy of Marcus Rashford's double, with manager Mourinho largely unconcerned when Eric Bailly put through his own net to cut the gap.

"We can split the halves – United first half and Liverpool second – but in my opinion our first half was a half with goals and danger," the Portuguese told Sky Sports after his side moved five points clear of their visitors.

"In the second half – in my opinion, and probably the people in the studio have a different opinion – was Liverpool controlling with the ball and United controlling without the ball.

"Even after [it went to] 2-1, [when] Liverpool could push for more and Jurgen [Klopp] tried to do that with changes, our team was always in control. Even in set-pieces, corners, dangerous situations, we were in control so I think we deserved it.

"Against Liverpool if you play bad when you have the ball you can be in trouble. In the second half it was not our intention – I cannot say this was the plan. Liverpool pushed us into defensive situation but we kept control. It was a complete performance by us with two different halves.

"I am a bit tired, we have a match on Tuesday. I don't care what people say. The boys are happy, I'm happy."

Sevilla are the visitors on Tuesday, when United will seek to progress to the last eight of the Champions League following a 0-0 draw in the first leg.