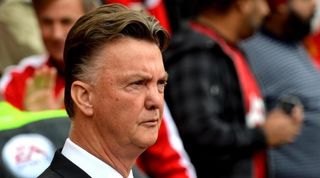 The Dutchman's start to life at Old Trafford has been impacted by a lengthy injury list, with United's defensive ranks in particular bearing the brunt.

However, their number of absentees did not lengthen over the international break, and the likes of Michael Carrick, Phil Jones, Chris Smalling, Ashley Young and Ander Herrera are all now available for selection.

Only Jonny Evans, Paddy McNair, Antonio Valencia and Jesse Lingard are ruled out of the trip to The Hawthorns - along with suspended captain Wayne Rooney - leaving Van Gaal delighted to see his squad returning towards full strength.

"This morning, we didn't need any players from the second team [in training] and that is a plus," he said on Friday.

"I am very happy because there are no injuries from the international games. I think we're in a good way.

"The players who are recovering are not able to play and we have to wait and see for the line-up on Monday.

"But we have only four players injured now. That is good."

Prior to the international break, United won back-to-back games for the first time under Van Gaal - seeing off West Ham and Everton in battling 2-1 victories at Old Trafford.

However, Van Gaal is aware of the threat West Brom will pose, with Alan Irvine's side having won three of their last four outings in all competitions.

"We have to start with a victory after the international break because we have won the last two games, but West Brom did that too so they also want to win the match," he added.