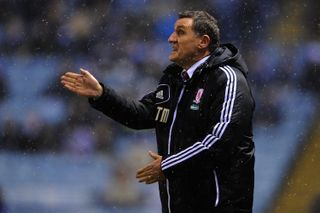 The former West Brom boss exits the Riverside Stadium following a prolonged run of poor form, which has seen Middlesbrough win only five matches in 2013.

They currently lie 16th in the Championship table and suffered a 3-2 defeat at the hands of struggling Barnsley on Saturday.

In addition, Middlesbrough were knocked out of the League Cup in August by League Two side Accrington, who have yet to win another match this season.

A popular former player for Middlesbrough, Mowbray succeeded Gordon Strachan in October 2010 and was the longest-serving manager in England's second tier.

Mark Venus, who served as Mowbray's assistant, has been placed in caretaker charge of first-team affairs and appears set to oversee Friday night's home game against Doncaster.

A statement on Middlesbrough's website read: "The club would like to place on record their sincere thanks to Tony Mowbray for all of his substantial efforts, dedication and integrity.

"He leaves with the very best wishes of all at the club."