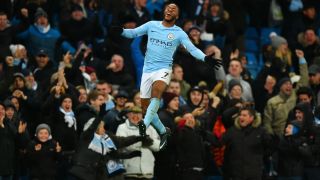 Manchester City restored their eight-point lead at the top of the Premier League thanks to a goal in the dying seconds by Raheem Sterling that sealed a dramatic 2-1 home win over Southampton.

A Kevin De Bruyne free-kick, diverted into his own net by Virgil van Dijk, had looked likely to be enough to give Pep Guardiola's side a 12th league win in a row until Oriol Romeu snatched an equaliser 15 minutes from time.

But Sterling curled home a sublime winner as the game crept into the sixth minute of injury time to maintain the hosts' charge towards the title.

City battled back from a goal down to beat Huddersfield Town last time out, Sterling also scoring the winner in that clash, and they could easily have found themselves behind in the first half at the Etihad Stadium against a Saints side buoyed by their 4-1 win over Everton.

Wesley Hoedt and Maya Yoshida missed clear opportunities to punish the home side for a sloppy opening period, with goalkeeper Fraser Forster equal to anything City were able to produce.

That was until the 47th minute, when De Bruyne's goal-bound delivery was deflected in at the near post by Van Dijk, allowing the home fans to breathe a little more easily.

The home side failed to add to the goal and were punished in the closing stages by Romeu's clinical finish, but Sterling struck to deny Saints a valuable point and frustrate title rivals Manchester United, who had looked set to make up ground on City.

A surprisingly slack start from City should have been punished 14 minutes in, with Hoedt only able to head against the crossbar from inside the six-yard box after Ryan Bertrand's corner was flicked on by Yoshida.

City broke swiftly and twice tested Forster, with Sterling and Gabriel Jesus denied by the England international, who then made a flying stop to claw away a Fernandinho effort after Mario Lemina was dispossessed in his own half.

Ilkay Gundogan then missed City's best chance of the half, scuffing a half-volley into the turf and behind for a goal kick after Forster had saved from Sergio Aguero, but the home side continued to look subdued and Yoshida missed a clear opportunity to punish them before the break, prodding an effort over the bar from point-blank range after Van Dijk's downward header.

Saints were made to rue those misses in the first two minutes of the second half. De Bruyne whipped in a low free-kick from the left of the penalty area and the ball was turned into his own net by Van Dijk, who was under pressure from Aguero.

We've scored in the second half of every game so far this season   November 29, 2017

Jesus was then thwarted by Forster when through one-on-one and the Saints keeper made a flying save to keep out a De Bruyne strike from 25 yards out, with City apparently keen to press their advantage and kill off any hope of a comeback from the visitors.

Aguero missed a free header from another De Bruyne delivery before Van Dijk spurned the chance to equalise, nodding another dangerous corner over the crossbar from six yards out.

However, just as the game looked to be getting away from the visitors, they snatched their equaliser. A deep cross from Bertrand was controlled expertly by substitute Sofiane Boufal and, when he picked out Romeu from the byline, the midfielder made no mistake in smashing high past Ederson.

City poured forward and their pressure told seconds after the allotted five minutes of injury time, Sterling bending a stunning strike into the top-left corner from the edge of the area to deal a blow to United and the chasing pack in the title race.