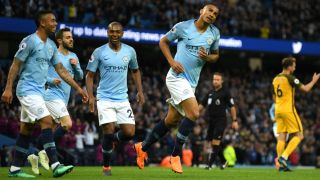 Captained by Yaya Toure in his final home game as a City player, the champions made light work of Chirs Hughton's side to move onto an unprecedented 97 points with their 31st league win of the season, surpassing Chelsea's record from 2016-17.

It was not all plain sailing for City - Danilo's 16th minute opener, superbly crafted by the exceptional Leroy Sane, was cancelled out by Leonardo Ulloa following Claudio Bravo's error.

Bernardo Silva's effort shortly after the half hour restored City's lead, though, moving Guardiola's side onto 104 goals in the process - yet another Premier League record.

More calamitous goalkeeping from Bravo threatened to set City back again early in the second half, but Fernandinho's strike 18 minutes from time made sure of the win.

That set up the perfect chance to give Toure a fitting send-off - the veteran making way to a standing ovation as City moved one win away from claiming 100 points.