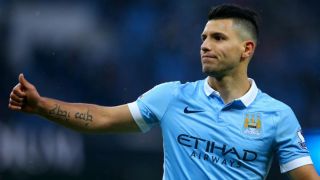 Manchester City manager Manuel Pellegrini was rewarded for taking a bold attacking approach as Sergio Aguero hit a brace in the 4-0 home win over Crystal Palace.

Victory moves City above Leicester City and Arsenal on goal difference at the summit ahead of their nearest rivals' weekend fixtures and acts as a welcome tonic to Wednesday night's frustrating 0-0 draw against Everton at the Etihad Stadium.

In response to that setback, Pellegrini opted to start with two recognised strikers – prodigious youngster Kelechi Iheanacho joining Aguero in attack, while playmaker David Silva returned as Raheem Sterling and Yaya Toure dropped to the bench.

City lacked their customary control of central areas in Toure's absence but the Ivory Coast star's central midfield replacement Fabian Delph fired them ahead midway through the first half.

It was another moment to forget for  Wayne Hennessey, whose dreadful error allowed lowly Aston Villa to beat Alan Pardew's side in midweek, but there was nothing the Palace goalkeeper could do as Aguero's deflected strike spun into the corner to make it 2-0.

City's top scorer added his second after half-time and Silva completed the rout with six minutes to go as Palace were left to reflect on failing to find the net for a fifth consecutive league match.

Connor Wickham replaced Bakary Sako up front as Pardew sought to address this slump, but it was visiting defender Damien Delaney who was afforded space in the area to draw a sharp second-minute save from Joe Hart.

Scott Dann had a header blocked from Jason Puncheon's corner before Wickham blazed over, meaning the opener came against the run of play after 22 minutes.

Having been instrumental in a tidy period of sustained possession, Delph surged forward and unleashed a 30-yard drive that skidded underneath Hennessey after he saw it late.

Palace had a chance to equalise in unusual circumstances as Hart clattered a clearance at James McArthur but Delaney scuffed the loose ball over.

At the other end, Aguero hooked narrowly wide having lost his footing under pressure but fortune smiled on the Argentina international four minutes before the break.

Aguero's clipped 25-yard effort deflected off Dann's head and Hennessey could not keep it out of his bottom-right corner.

City lost Aleksandar Kolarov to a calf strain amid snowfall early in the second half, Gael Clichy replacing his fellow left-back, and Toure appeared before the hour in place of Iheanacho.

Palace still looked to ask questions of their hosts, Joel Ward whistling a low strike wide from the edge of the box, but Hart's backline had long since shed their early jitters.

Toure was involved when City made the points safe, feeding Kevin De Bruyne to cut across goal for Aguero to stroke his 13th of the season into an unguarded net.

Palace still gamely sought to end their dry spell but this willingness to push forward allowed Aguero to stream clear on the break and unselfishly feed Silva for a simple finish, sealing another chastening reverse for the Londoners at a ground where they were beaten 5-1 in this season's League Cup.