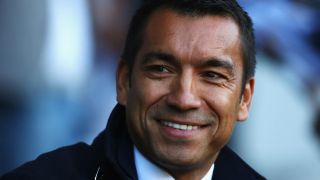 Dutch champions Feyenoord make their return to the group stages of Europe's premier competition against City at De Kuip on Wednesday after a 15-year absence.

The Premier League club were not a factor among the continent's heavyweights back then, before Sheikh Mansour's 2008 takeover transformed their fortunes.

But, although City won the English top flight in 2011-12 and 2013-14 to sit alongside three domestic cup triumphs over recent seasons, success on the continent has proved elusive, with a 2015-16 run to the semi-finals the only time they have progressed beyond the last 16 in six attempts.

Pep Guardiola oversaw a spending spree in excess of £200million during the recent transfer window to upgrade an aging squad and City have taken 10 points from their opening four Premier League games this term.

Such form has not gone unnoticed by ex-Netherlands midfielder Van Bronckhorst.

"Manchester City have had a good start to the season. They are a big club with a great coach and great players," he said.

"They are one of best teams in Europe. It's a big task and challenge for us to get a result here.

"They have players with lots of quality and experience and to me they are one of the teams that can win the Champions League."

Van Bronckhorst won the European title as a player in 2006 when Barcelona overcame another of his former clubs, Arsenal, at the Stade de France.

The 42-year-old believes luck can play a big part in the latter stages of the competition, even for a coach he admires such as Guardiola.

"It's hard in the Champions League," he said. "I won in 2006 and [between] the big teams the difference is not big, it's small. Sometimes you have to get lucky.

"I think [Guardiola] is doing a great job. At this moment they have the ability to get results this year.

"He's a great manager. He's a big inspiration. He's won everything in football. He has his own vision."

Van Bronckhorst confirmed Feyenoord will be without striker Nicolai Jorgensen and defender Ridgeciano Haps due to hamstring injuries.