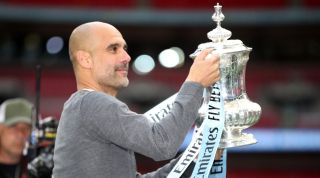 The Spaniard made history over the weekend by leading his side to the FA Cup with a 6-0 win over Watford, becoming the first team to win the domestic treble in English men’s football.

According to the Sun, the 48-year-old is set to be rewarded with a lucrative contract renewal as he enters the final two years of his current deal.

Guardiola’s salary will rise from £15 million to £20 million per season if he agrees to the terms, earning him £100 million over the next five years.

The former Barcelona and Bayern Munich boss has been linked with the vacancy at Juventus but underlined last week that he has no interest in leaving City.

That is despite uncertainty over a possible Champions League ban for the club over charges of breaching UEFA's Financial Fair Play regulations.

QUIZ! Can you name the most-used new player by every Premier League team in 2018/19?