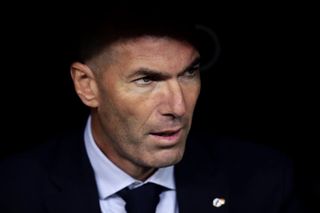 Manchester City will play Real Madrid in the Champions League round of 16 first-leg at the Bernabeu on Wednesday night.

Guardiola returns to the home ground of his main rivals, both from his playing and coaching days in Barcelona.

But the Spaniard has been full of admiration for his French counterpart Zidane.

"What he's done in Europe will not be repeated," said Guardiola in his press conference on Tuesday.

"To win three consecutive Champions Leagues proves how great this club is. It goes on, generation after generation."

Guardiola won the Champions League twice with Barcelona, but not in consecutive seasons.

Zidane revealed how he'd learned a lot from Guardiola, who he visited in Munich whilst an assistant under Carlo Ancelotti.

"We obviously take inspiration from what they (City) do well," Zidane said in his own presser earlier.

"It was great to spend time with him. He was sincere, open and with someone like that you can always learn things."

Guardiola responded to Zidane's gratitude with yet more praise for Los Blancos' boss, further showing the respect between the two managers.

"It was our pleasure, he came with other colleagues from France and spent some days with us," he said.

"We had some discussions and it was wonderful. He was starting to learn and he was one of the greatest players of all time so it was an honour."

Who will win the 2019/20 Champions League? FourFourTwo writers make their predictions