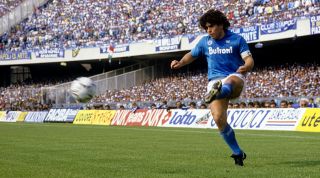 An evil genius is still a genius! Love him or loathe him, El Diego was undeniably that: a genius. The pint-sized Argentinian was capable of producing moments of magic on a football pitch few others could - as England's 1986 World Cup vintage can attest. His performances for Argentina, Boca Juniors, Barcelona and Napoli have gone down in legend.

Here, we take a look back at his most extraordinary feats...

Considered too young for Carlos Menotti’s 1978 World Cup squad despite having made his debut in 1977, aged 16, Maradona duly went about terrorising poor saps his own age the following year in Japan.

Argentina won it – of course – thrashing Indonesia (5-0) and Poland (4-1) in the group stage (also edging out Yugoslavia 1-0), with Maradona helping himself to three of the goals. Algeria were hammered 5-0 in the quarter-finals, Uruguay seen off in the semis and then the Soviet Union too, 3-1 in the final. Maradona helped himself to a goal in each knockout game, rounding off the scoring in the final with a virtuoso display.

Ramon Diaz may have won the Golden Shoe, but Maradona claimed the Golden Ball for being the tournament’s best player. Needless to say, he wasn’t considered too young for Argentina duty again.

Maradona was only 15 when he made his Argentinos Juniors debut in October 1976, and stayed with his first club for five years before making his dream move to Boca in 1981.

But not before he’d humbled them first. Four months earlier in the Campeonato Nacional, Maradona had stuck four goals past Boca in a 5-3 win, fuelled by their goalkeeper Hugo Gatti’s pre-match comments about “the little fatty”.

His first goal came from a penalty he’d won by rabona-ing the ball onto a Boca defender’s arm. The second was a brilliant quick free-kick from a tight angle; the third a delightful stabbed chip with the outside of his foot after controlling a high ball on his chest. No.4 came from another free-kick also won by his brilliance; a one-two sent him clean through, only for Boca’s last man to hack him down on the edge of the box.

The wall was expecting a whip from Maradona’s trusty left peg, but instead he opened up to blast a side-footed beauty past an amusingly-bespectacled Gatti. Not bad for a little fatty.

It’s quite a testament to the diminutive genius’s second goal in this World Cup quarter-final that it only ever-so-slightly overshadowed his opener (you might know it).

Peter Beardsley will have surely wished he’d chopped Maradona there and then after the Argentine had pirouetted past him in his own half. Perhaps the Geordie moptop could be forgiven, though, for thinking his team-mates could take care of the 5ft 5in danger dwarf with half a pitch left to do his damage in.

Jogging past a puffing Peter Reid proved unsurprisingly easy; more horrifying was the ease with which he made a mockery of hard man Terry Butcher with a simple skip inside. With his next touch, beautifully delayed, he took out a hapless Terry Fenwick, then rounded Peter Shilton. Butcher’s sliding challenge was in vain: Maradona had scored one of football’s greatest ever goals and Argentina were 2-0 up after 55 minutes. They’d win 2-1 to set up a semi-final meet with Belgium, in which El Diego plundered another brace.

Having seen Maradona embarrass both England and Belgium, West Germany weren’t in any mood to be bossed around by him. Franz Beckenbauer’s boys had hardly inspired en route to the final, though – they squeaked through the group behind Denmark, edged past Morocco, beat Mexico on penalties and then finally clicked into gear with a 2-0 win over France in the semis.

Beckenbauer instructed his troops to double up and go in hard on Argentina’s talisman, but that only opened up space for his team-mates to work in. Junior Brown and Jorge Valdano goals had Carlos Bilardo’s side 2-0 up after 55 minutes, but West Germany fought back to level with 10 minutes remaining via efforts from Karl-Heinz Rummenigge and Rudi Voller.

Step forward Diego. There was no obvious danger when he turned with a bouncing ball in the centre circle, not least with two green shirts bearing down on him fast. But with impeccable vision and a swish of that left boot, he played in Jorge Burruchaga to hare away down the right and jab home an 83rd-minute winner.

Fresh from world domination, Maradona duly set about bringing glory to Naples. Napoli had finished 8th and 3rd in the Argentine’s first two seasons in Italy, and hadn’t made it past the last 16 of the Coppa Italia.

But then it all came good: Napoli didn’t lose any of their first 12 games of 1986-87 and won at both Juventus and Roma, the previous season’s champions and 2nd-placed side respectively. Maradona – the only non-Italian in Napoli’s squad – got the solitary goal in Rome, one of 10 in a Serie A season that averaged only 1.93 goals per game (among the lowest in the league’s history).

It finished with a title for the Partenopei, their first-ever in Serie A, celebrated with wild street parties and even mock funerals for their close rivals. When they followed it up with a 4-0 aggregate Coppa Italia final win over Atalanta – Maradona setting up two of the goals – Naples was agog.

Napoli went on to win the UEFA Cup in 1989, but made a fine job of even getting to the final. It certainly didn’t look very likely after they’d lost 2-0 in the first leg of their quarter-final against Italian rivals Juventus.

Good, then, that they hadn’t given up hope themselves. In front of a frothing Stadio San Paolo crowd, Maradona – in a fine personal display – slapped home a 10th-minute penalty to open the scoring and then watched team-mate Andrea Carnevale thump in a stonking second from the edge of the box on half-time.

That’s how it remained, deep into extra-time – the 119th minute, in fact – when France-born Alessandro Renica headed the dramatic winner that took Napoli through. And wasn’t the crowd happy about it.

A video to warm even the coldest soul. Maradona’s approach to limbering up for Napoli’s UEFA Cup semi-final against Bayern Munich may have horrified physios, but it’s since delighted millions on YouTube. (It didn’t matter anyway: the 2-2 second-leg draw was enough after a first-leg 2-0 win.)

The pint-sized funster chose instead to delight his Munich crowd with a cheery keepy-uppy exhibition to the music of Opus’s 1984 smash Live is Life. We’ll say no more: just watch it for yourselves and let those troubles wash away.

Having tried but twice fallen short of reclaiming their title, Napoli went again with Milanese revenge on their mind. They’d finished second behind Milan in 1987-88 (Maradona top-scored Serie A with 15 goals) and then Inter in 1988-89, but didn’t fancy losing out again.

As such, they didn’t lose their first game under December 30 – a 3-0 humping at Lazio – and conceded only 12 goals in the 16 games before that. Maradona was exceptional, scoring in half of those matches and laying on seven assists (the highlight a scintillating goal and two-assist display in a 3-0 win over Milan).

He continued the second half of the season in similar form: 10 goals in Napoli’s last 15 games of the season (two of which he missed) helped fire them to the title, including a first-half brace in a crucial 3-1 win over Juventus.

Even a half-fit Maradona was able to influence a World Cup game against Argentina’s arch-rivals. Make no mistake, though: this was not the swashbuckling side of 1986, and with El Diego carrying a knee knack into the tournament, things were always going to be an uphill struggle for the Albiceleste. Yet they still reached the final anyway.

Argentina lost 1-0 to tournament heroes Cameroon in the opening game, though, and only squeezed through the group in third after a 1-1 draw against Romania in Maradona’s adopted city of Naples. (Those, in between a 2-0 win over the Soviet Union lesser-known for another unpunished handball from the diminutive dodger, this time to prevent a goal).

Their fumblings led to a knockout clash against group winners Brazil, who’d won all of their games and conceded only once. On form the Seleção should have continued their streak, but in a scruffy game it was Argentina’s 30-year-old skipper who cracked the game open with a trademark dribble from inside his own half.

Three Brazilians were beaten by the run and by the end four had been sucked towards him, opening up space for Maradona’s pass to Claudio Caniggia, who coolly rounded Claudio Taffarel and finished.

Maradona was sent home in disgrace from the USA after failing a drugs test for ephedrine (which he blamed on his personal trainer, then later claimed he had a broken agreement with FIFA to use it for weight loss) – in what was a truly awful tournament for Argentina.

They beat Greece and Nigeria to make it through the group, but went out to Romania in the second round in front of 90,000 at the Rose Bowl. The 2-1 win over Nigeria was Maradona’s last game for his country – powdered up to the eyeballs and 34, it was an ungraceful way to end a magical international career.

But he didn’t leave without making an indelible mark on USA 94. Argentina demolished Greece 4-0 in their opening game, with Gabriel Batistuta plundering a hat-trick, but the only thing anyone really remembers is Maradona sealing an exceptional one-touch team move and the camera-bawling celebration that followed.

EUROPE 20 Barcelona players you probably forgot ever wore the shirt