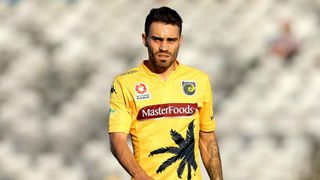 Manchester City have completed their first signing of the January transfer window in the form of Australian Anthony Caceres.

Caceres arrives at the Premier League giants from A-League battlers Central Coast Mariners, who confirmed the midfielder was signing for City on Friday.

Mariners coach Tony Walmsley said he was sad to see Caceres leave the club but said the club should celebrate the 23-year-old's big move.

"We need to celebrate when players at the Central Coast Mariners are sold to bigger Clubs. It's our charter. It's our intent," Walmsley said.

"When I brought Anthony Caceres to the Mariners his potential was obvious.

"This move demonstrates how far Anthony has progressed and symbolises how giving youth a chance works for both the Central Coast Mariners and young aspirational footballers."

Since signing for the Mariners during the 2012-13 season, Caceres has made 64 senior appearances, scoring three goals.

Caceres is the second player City have signed from the A-League since investing in Melbourne-based club Melbourne City, having picked up former Brisbane Roar midfielder Luke Brattan in the last transfer window.

Brattan was loaned out to Bolton but has since returned to Manchester and it is expected that Caceres will also be loaned out, although his reported destination is in Australia with Manuel Pellegrini and Co. set to loan the midfielder to their affiliate club in Melbourne.

However, Melbourne City coach John van 't Schip has distanced his team from such rumours, insisting that Caceres will go to England.

"Manchester City is getting him [Caceres] in. More or less, that's it," the Dutchman told reporters on Friday.

"We can't comment on [a potential loan move] but of course everybody knows he's a good player, he's one of the better players in the A-League. So we'll just have to see."