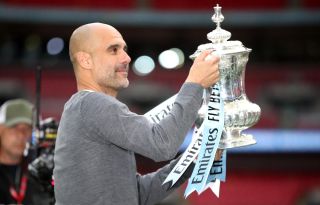 Manchester City will start the defence of their Premier League title at West Ham.

The 2019-20 fixtures, announced on Thursday morning, handed Pep Guardiola’s team an opening match at a venue which has proved to be productive for them since 2017.

City, who have won successive Premier League titles, have picked up three points in east London in the last three seasons – scoring four goals on each occasion.

The champions follow their August 10 lunchtime trip to the London Stadium with a home match against Tottenham. Games against Bournemouth, Brighton, Norwich and Watford follow.

Liverpool, pipped by a point to the title by City, get next season up and running on Friday, August 9 at home to newly-promoted Norwich. Clashes against Southampton, Arsenal, Burnley, Newcastle and Chelsea round out their first six fixtures.

Last season’s top two meet at Anfield on November 9, subject to TV confirmation, with the return at the Etihad scheduled for April 4.

The run-in would also appear to favour City, who do not face any teams who finished in the top half last season in their final six matches, following that visit of Liverpool. In contrast, Jurgen Klopp’s side have a home game against Chelsea sandwiched between trips to Arsenal and Newcastle.

Manchester United, who finished sixth last time around, have an eye-catching opener, at home to Chelsea on Sunday, August 11. Whether Maurizio Sarri is still in charge of the visitors remains to be seen, with the 60-year-old Italian linked with the vacant managerial role at Juventus.

Arsenal start at Newcastle, also on the Sunday, with the other opening day fixtures taking place on the Saturday.

The evening match sees Aston Villa, who secured a top-flight return with victory over Derby in the Championship play-off final, face a tough opener at Spurs – who finished fourth last season.

The other newly-promoted team, Sheffield United, start at Bournemouth – meaning the Cherries’ Wales international winger David Brooks could line up against the team he left last July.

There is a sense of deja vu as Watford host Brighton in a repeat of last season’s opening match, while Turf Moor opponents Burnley and Southampton faced each other at St Mary’s first time around in 2018-19.

Elsewhere, Crystal Palace are at home to Everton and there is a Midlands derby with Wolves travelling to Leicester.