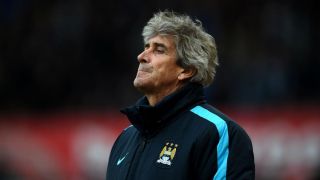 Manchester City's hopes of topping a Champions League group for the first time hinge on Tuesday's visit of a resurgent Borussia Monchengladbach side hoping to snatch third in Group D and a place in the Europa League.

City have already booked their place in the last 16, but they require Juventus to lose at Sevilla as well as a win of their own at the Etihad Stadium against their Bundesliga opponents.

Successive eliminations at the hands of Barcelona has been City's fate in the past two seasons having failed to top their groups.

They will be desperate to avoid another early clash against one of Europe's heavyweights, although their weekend fortunes could hardly have contrasted more to those of Gladbach.

Manuel Pellegrini's men were soundly beaten 2-0 by Stoke City while Andre Schubert's side halted Bayern Munich's unbeaten start to the Bundesliga campaign with a 3-1 win.

Schubert's only defeat since taking over at Borussia-Park in late September came against City in the reverse fixture, but Pellegrini will be without key trio Sergio Aguero (foot), Yaya Toure (muscle) and captain Vincent Kompany (calf).

The Chilean said of the players' respective returns: "I don't know, but for Tuesday, no. We don't know [about next weekend], it depends how they recover during the week.

"[Against Stoke] we were playing with the same players in the last three games, maybe it's the reason we didn't play with energy.

Gladbach's upturn in fortunes has continued since Schubert was made permanent coach following an interim spell, with his side still in with a chance of European football in 2016.

A victory at City, coupled with a Sevilla win over Juve, will ensure third place, and a buoyant mood is coursing through the Gladbach ranks after their weekend success.

"We've gained a lot of confidence in the last few weeks and we'll go to Manchester with good belief in what we can do," United States full-back Fabian Johnson told the Bundesliga website.

"We play with guts going forward and we don't hide in games. A lot of teams just sit back and shut up shop against Bayern but we played the way we wanted to play.

"That's what's marking us out at the moment and we're getting our rewards for it. But even a win like this only gives us three points so we need to keep up the hard work and give 100 per cent again against Man City."