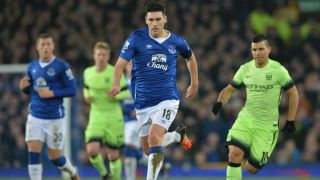 Roberto Martinez's side take a 2-1 lead to the Etihad Stadium, after goals from Ramiro Funes Mori and Romelu Lukaku sandwiched Jesus Navas' equaliser in the first leg at Goodison Park.

However, Everton go into the return fixture without a win in their last three outings - although a repeat of the 0-0 Premier League draw at the Etihad on January 13 would see them reach the final of this competition for the first time since 1984.

On Sunday, Barry's near-post flick deflected in off Jack Cork for an Everton equaliser, but Swansea City came away from Goodison with a 2-1 triumph as the Toffees' stuttering season continued.

"The ideal world going into a game like Wednesday, would be with a win," former City midfielder Barry told the Liverpool Echo.

"There is nothing better than going into games on a winning run, when you are feeling confident, but that's where we are at the moment.

"We have got to go into a League Cup semi-final on the back of a defeat."

Everton will be forced to contend without Kevin Mirallas and Muhamed Besic, who limped off with respective knee and hamstring problems in the defeat to Swansea.

Phil Jagielka, recently back from a long-term knee injury, was rested for that game and could return at the heart of the defence as Everton attempt to shackle City star Sergio Aguero.

The Argentina international scored both goals as City twice came from behind in Saturday's 2-2 draw at West Ham, a result that leaves them three points behind Premier League leaders Leicester City.

Despite Aguero's heroics at Upton Park, manager Manuel Pellegrini has insisted City are not overly reliant on the diminutive forward.

"I don't think that our team is just Sergio Aguero," he said. "If you see we play this season in the Premier League 23 games. In those 23 games there are 11 players that play more minutes [than Aguero].

"It's not David Silva, it's not Sergio Aguero, it's not Vincent Kompany [in the top 11].

Joe Hart made a stunning save from a Dimitri Payet free-kick during that game, but Pellegrini has confirmed he will continue his policy of selecting back-up keeper Willy Caballero in the cup competitions.

Pellegrini, who is hoping to lift the League Cup trophy for the second time following success against Sunderland two years ago, has doubts over the fitness of Wilfried Bony (calf), Aleksandar Kolarov (muscular) and Eliaquim Mangala (hamstring).