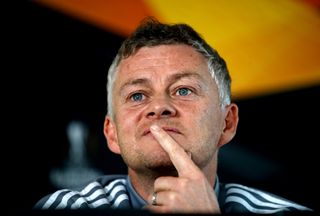 After 30 topsy-turvy years, the Reds finally secured the league crown once again after nearest challengers – and reigning champions – Manchester City lost 2-1 at Chelsea on Thursday evening.

Liverpool’s 19th title triumph sparked wild celebrations, leaving them one behind United’s record haul and putting a fire under Solskjaer’s side.

“First of all, any team that wins the championship and a Premier League deserve it and they deserve credit,” he said.

“It’s a hard league to win, so well done to Jurgen (Klopp) and his players.

“For me, every time you see anyone else lift the trophy it hurts. I reckon that’s the feeling everyone associated with Man United – all players, staff and supporters. Of course we want to get back to winning ways and that’s our challenge.”

Solskjaer is hoping FA Cup glory can provide a catalyst for further success, with United heading to Norwich on Saturday in the quarter-finals.

“For our team, it’s a new team and to get hands on a first trophy and win a first title would be fantastic and hopefully a catalyst for more things to come.

“So we are focused on doing our best, getting through to the next round and hopefully to the final.”

Solskjaer plans to rotate his squad at Carrow Road, where Jesse Lingard will feature having yet to play a minute since the restart.

“Jesse has come back after the lockdown with a smile on his face, loads of energy,” he said.

“Unfortunately, last week he fell ill for a couple of days but we’ve done all the tests and he’s fine, so he’ll be involved against Norwich now and hopefully he can kick on.

“Jesse has scored vital goals for us and he’s been a vital player for us, so let’s see what the future will hold because at the moment he’s looking really sharp and focused.”