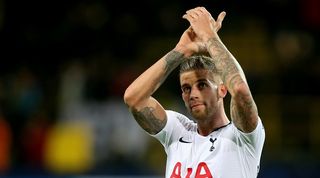 Alderweireld has refused to sign a contract extension at Tottenham and is reportedly available for a knock-down fee of £26m ahead of next season.

And while Vidic admits he would like to see the Belgian centre-back in a United shirt, he thinks his former employers should target a new midfielder instead.

“Of course, I would like to see him there,” he told Stadium Astro. “But I think the club has to have a priority.

“What I see is, if you want to be in the Champions League next season and challenge for the Premier League, you have to strengthen the midfield.

“You need that depth in the midfield area. In defence they already have five players, so they can rotate, and it seems like they’re doing well.”

Ole Gunnar Solskjaer’s side return to Premier League action against Watford after the international break, having suffered a 2-1 defeat by Wolves in the FA Cup quarter-finals on Saturday.