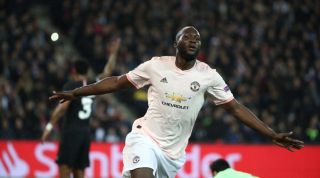 The 25-year-old was ruled out of his country’s double-header against Russia and Cyprus recently with a foot injury, but has scored 45 goals in 79 caps.

Lukaku also netted four times during last summer’s World Cup to help Belgium finish third, and doesn’t think there is any argument as to his status among Belgian strikers.

"People sometimes ask me if I am one of the top three Belgian strikers of all time,” he said to Otro.

“Yes, yes, yes, yes. I would even say that I am the best of all time. One kilometre ahead of anyone else, I'm telling you.

“I'm number one on the national team scoring list, with 34 goals in my last 33 games. What can you tell me now?”

Lukaku admitted that he found life with the national team difficult to begin with, as he had to wait until his eighth cap before he found his first goals with a double against Russia in November 2010.

However, the former Everton front man only scored one more goal for Belgium in his next 14 games and admitted that the reaction to his early performances annoyed him.

"It didn't work from the beginning,” he said.

“People thought I wasn't good in Belgium. They thought I wouldn't score more than 25 times. I said to myself, "Wow" – I think I was barely nineteen at the time.

"Every time I play for Belgium, I play with a feeling of anger rather than pride. I told my mother that she should never come back to see me play with the Red Devils [Belgium] again, any more than my father. That's why I wave to the camera when I score. I know she's looking at me at home."

NOW READ... Ranked! The 10 best forwards in the world