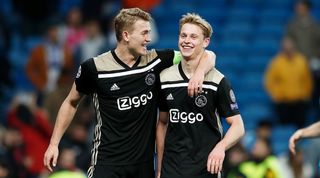 The Netherlands internationals, who have emerged as two of the brightest talents in European football this season, impressed again in Ajax’s 1-1 Champions League first-leg draw against Juventus on Wednesday.

De Jong has already agreed an €86 million move to Barcelona this summer, while there is set to be a bidding war between some of Europe’s biggest clubs for De Ligt in the coming weeks and months.

However, Langley says that if the Old Trafford hierarchy had heeded his advice, they could have been snapped up by the Red Devils years before exploding onto the scene.

"Players that they turned down? Matthijs de Ligt,” he told the Manchester Evening News.

“We had god knows how many reports on Matthijs de Ligt. Frenkie de Jong and all these players now are around Europe.

"Dayot Upamecano, who is now at RB Leipzig, was another.

"This was one of the reasons why I had a meeting with Ed Woodward and I told him that I wasn't convinced with the competency of certain people at the club.

“I told Ed Woodward quite straight: 'If you think I'm going to sit here and just tell you what you want to hear, I'm not that man because I'm going to tell you exactly how I see it.'

"I think it was possibly part of my downfall as to why, seven months down the line, I was removed. I wouldn't tow the line in relation to telling them exactly what I thought.

"It's one of them things in football - you come to accept it. Manchester United thanked me for the time I spent there and the players I'd taken in, but ultimately we could have been so much better if people had listened."

QUIZ! Can you name all 32 clubs Cristiano Ronaldo has scored against in the Champions League?