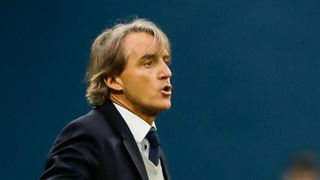 Mancini will lead Zenit to the end of the Russian Premier League season before starting negotiations over the role, FIGC head Roberto Fabbricini said on Tuesday.

The former Manchester City manager had been considered a frontrunner for the post, with Carlo Ancelotti among the other names reportedly in the frame.

Gian Piero Ventura was dismissed after Italy surprisingly failed to qualify for the 2018 World Cup, the Azzurri losing a play-off against Sweden in November.

And Mancini is set to take over in time to lead Italy through their qualifying campaign for the 2020 European Championship.

"We're agree to start talking about figures and details on May 13, with the end of Russian championship.

"I want to say that there is nothing decided. With Mancini we will clarify that the FIGC has a budget for the role which it does not intend to deviate from, and we'll also need to talk with him about the Azzurri coaches which we would like to make sure remain with the future coach."

Zenit sit fifth in the Russian Premier League table and are in danger of missing out on Champions League qualification with two matches remaining, while Mancini's men lost to RB Leipzig in the last 16 of the Europa League.

Mancini led City to the Premier League title in 2011-12 and had spells in charge of Inter and Galatasaray before joining Zenit in June 2017.

"You never know in life, I think that coaching Italy one day would be an extraordinary thing," the 53-year-old told Sky Italia in March.