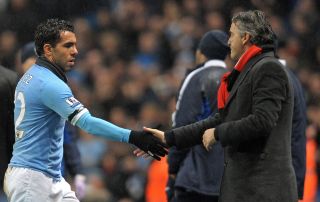 The Italian signed a three-year deal at the Turkish champions on Monday after Fatih Terim paid the price for a poor start to the campaign that saw the side win just once in five domestic fixtures.

Mancini's first match in charge sees Galatasaray travel to the Juventus Stadium to face the Serie A champions in Wednesday's Group B fixture.

The game will see Argentina international striker Tevez reunited with Mancini, the duo having worked together at Manchester City.

The pair are believed to have endured something of a fractious relationship at City and famously fell out when Tevez refused to come off the bench in a Champions League fixture against Bayern Munich in September 2011.

But Mancini insists he is looking forward to meeting up with a player who was part of the City team that won the Premier League during the 2011-12 season.

Speaking ahead of the Juventus game, he said: "I'll be very happy to see Tevez again.

"He's a great player and we made history together with Manchester City in England."

Mancini admits it is not an ideal situation preparing for the Juve game a matter of hours after being named manager, with the pressure further amplified by the team's 6-1 drubbing at home to Real Madrid in the first group stage game.

But the 48-year-old is hopeful of a good performance.

He added: "It's certainly a handicap to take the reins on the eve of the game, but we'll look to make the best of it.

"It will be strange because I only met the squad (on Monday), but we hope we'll be able to put in a good performance.

"I'm not fully familiar with all of the players, thankfully the international break is coming soon so I'll get to know them better.

"The first game was a difficult one, but we've got five left and we'll look to qualify from the Champions League group stages.

"It will be a difficult game because Juventus are an excellent team. (Antonio) Conte has done a great job."