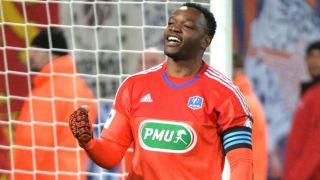 Steve Mandanda claims to have rejected interest from several clubs to remain with Marseille.

Mandanda, who is out of contract at the end of the season, has been heavily linked with a move away from the Stade Velodrome. Besiktas, Liverpool and Aston Villa have all been credited with interest in the 30-year-old.

President Vincent Labrune insisted Mandanda would not be leaving the club earlier this week.

The France international confirmed he was the subject of multiple enquiries but told L'Equipe: "I had very advanced contacts. But I needed reflection and came to the conclusion that the best thing for me was to continue the Marseille adventure.

"We cannot make decisions without meeting people. I saw the coach [Michel], and president. We had a man-to-man talk this week.

"It [the enquiries] means people are interested. I do not know what will happen in six months [when his deal expires], if I will always have the same proposals, if I will stay in Marseille.

"But I have learned to live with this uncertainty."