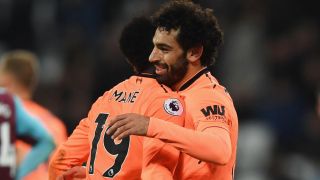 Liverpool attacker Sadio Mane believes there is even more to come from Mohamed Salah, saying the star would continue scoring.

Salah scored a brace in a 4-1 win over West Ham to take his tally to seven Premier League goals this season – a total only bettered by Sergio Aguero and Harry Kane.

Mane talked up his fellow attacker, who arrived from Roma for a reported €42million in June, as Jurgen Klopp's side sit fifth through 11 league games this season.

"He is a fantastic signing for us. Everyone is happy to get him in the team," the Senegal international told UK newspapers.

"We are trying to help him score more goals for the team and he will do it. He is a great player.

"Honestly, I always enjoy playing with these players. We know each other well. Not just the front three but all of us.

"We look forward to play more games together and play some good games."

Mane made his return from a hamstring injury in Liverpool's win, setting up both of Salah's goals before coming off in the 77th minute.

The 25-year-old was delighted to be back and said he was feeling good.

"I am very happy. It was not easy for me to be out with the injury, but more importantly I am back, I played a very good game and we won the game," Mane said.

"I am feeling 100 per cent. There is no excuse for me. Even when I was injured I was always working hard."