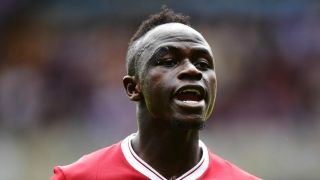 Jurgen Klopp says Sadio Mane remains in rehab after a hamstring injury, but played down Liverpool's ability to prevent him travelling with Senegal for crucial World Cup qualifiers.

Mane returned to Merseyside from the last international break injured and has missed fixtures against Manchester United and Maribor, while he will sit out Sunday's trip to face Tottenham.

The Reds initially put a six-week timeframe on Mane's recovery, ruling him out until late November, but Senegal coach Aliou Cisse has included the attacker in his squad to face South Africa on November 10 and 14.

Cisse claimed Mane would be "100 per cent fit" to play as Senegal look to tie up a place at the World Cup, but Klopp has a different view.

"Sadio is still in rehab, it is indoor, not even for any exercise outside, that's the situation at the moment. If he is fit earlier I would be really happy but nobody knows, so there is nothing else to say.

"They have very important games don't they, so that's to be qualified for the World Cup I imagine they feel the pressure a little bit, we cannot change the situation.

"If Sadio is fit, we cannot hide it, why would we? If he is fit we can do nothing to keep him here and he will go with Senegal."