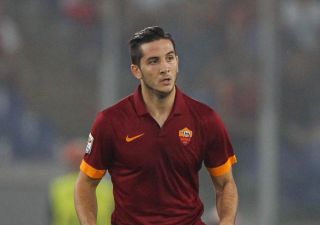 The Greece international centre-back moved to Stadio Olimpico as a replacement for Mehdi Benatia from Olympiacos for an initial €13 million, with a possible further €2m due if he reaches certain milestones.

Manolas has since made six Serie A appearances for Rudi Garcia's men, who have made an impressive start to the season and currently sit just one point adrift of leaders Juventus after seven matches.

The 23-year-old was hot property in the last window after impressing at the World Cup and he admits the possibility to join Roma's title rivals Juve and Premier League side Arsenal were both possibilities, but he is content with the decision he made.

"It's true, Juventus sought me out after the World Cup. I could also have ended up at Arsenal," he told Il Tempo. "But I never went to London as it was reported.

"Now for me there is only Roma. I'm very happy to have come here."

Next up in a highly competitive Group E is Tuesday's encounter with German champions Bayern Munich and, despite the strength of the pool, Manolas is confident of clinching top spot and believes there is no limit to the success Roma can enjoy in the tournament.

"It will be a difficult match against one of the best teams in Europe," he continued. "I do not know how it will end against Bayern, but it will be a challenge not to be missed.

"There are no limits [to what we can achieve in the Champions League], we want to get as far as possible. We are also able to win the group, why not?"