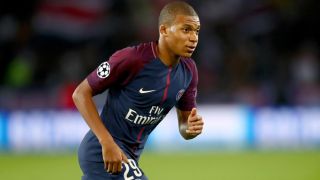 Mbappe was linked with a big-money move to Los Blancos throughout the off-season, before settling on a switch to Paris Saint-Germain.

The 18-year-old is already an established squad member for France and finished seventh in this year's Ballon d'Or count following a breakout 2016-17 campaign for Monaco.

And he has received a ringing endorsement from one of the greats of the game.

"Mbappe, for me he is the big revelation in football. I think he can surpass many players," Maradona told Spanish publication AS.

"And why did [Perez] not sign him? I told him! It was when we saw each other at FIFA.

Madrid, fourth in LaLiga after 15 games, subsequently failed to bring in attacking reinforcements and have scored eight fewer league goals than leaders Barcelona.

Maradona defended the value of Karim Benzema, but believes Gareth Bale should be moved on by the European champions.

"Sell Bale, give Bale away," he said.

"He will surely be a makeweight for something, and Florentino will be left with half of Madrid or half of Italy and Bale will play for AC Milan or Inter.

"But I think they have to buy Mbappe."