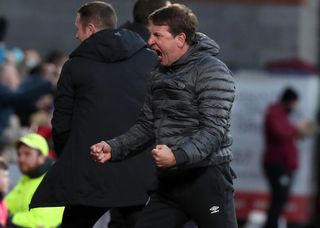 New Hearts signing Marcel Langer jumped at the chance to reunite with Daniel Stendel and taste the “crazy” Tynecastle atmosphere.

The 22-year-old holding midfielder has signed for Hearts until the end of the season after leaving Schalke, where he played for the reserves.

The deal has taken a while to finalise but the German has been keen to work with Stendel again after being contacted by the Hearts boss in December.

Langer told Hearts TV: “It was not really a hard decision to make. I like adventures. It’s a new country, a new city and a new language. I’m looking forward to it and I’m happy.

“When I played in the youths for Hannover 96 I worked with the manager in the under-19s. We were really successful. We won the under-19s German cup. It was a good connection.

“The manager called me before New Year’s Eve and yes, I was really direct – I want to do this. Then we talked with Schalke and the club and now I am here.

“I watched the highlights from the Rangers game and the atmosphere was crazy.