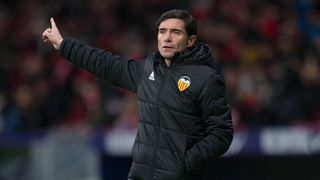 Marcelino has been rewarded for a fine first year in charge of Valencia with a new contract that runs until the end of the 2019-20 season.

The 52-year-old former Sevilla and Villarreal boss secured a one-year extension to his existing deal after leading his side to fourth place in LaLiga last term.

Valencia have been hampered by instability since December 2015, with the head coach role changing hands six times, but the appointment of Marcelino and regular goals from Spain striker Rodrigo helped seal a return to the Champions League for the first time since the 2015-16 campaign.

The club stated they were "delighted to have finalised such an agreement" after announcing Marcelino's extension.

Valencia's pre-season preparations get underway against Galatasaray in Switzerland on Saturday, before further friendlies with the likes of PSV, Leicester City, Everton and Bayer Leverkusen.