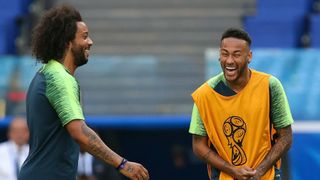 Brazil head coach Tite has confirmed Marcelo is back in contention for a place in his starting XI in Friday's World Cup quarter-final with Belgium after recovering from a back injury.

The Real Madrid left-back lasted just 10 minutes of Brazil's 2-0 Group E win over Serbia, when he was forced off with back spasms and replaced by Filipe Luis.

Marcelo subsequently missed the 2-0 defeat of Mexico in the last 16 and Filipe Luis generally looked assured, even if Hirving Lozano caused him a few issues.

Tite did not confirm whether or not Marcelo will return to his starting XI, but he is ready to make a comeback in Kazan.

"Marcelo left because of a clinical problem, he hasn't been back because of his condition," Tite said to reporters at the Kazan Arena.

"Filipe Luis played well in the two matches. Marcelo is coming back."

One player who still does not appear to have done enough to earn a starting role is Roberto Firmino.

The Liverpool star scored Brazil's second in the win over Mexico after replacing Gabriel Jesus, who has had an underwhelming tournament so far from an individual perspective.

"The play is designed according to the match itself," the coach said. "Versatility plays a role, Jesus has that and we can adjust to him. All the players joining [as substituted] have been effective.

"I make a confession here about after the Serbia game - I usually hug everyone, I don't talk too much because the changing room isn't the place for that.

"But I gave Firmino a hug and said you deserved that [goal] for the two matches you played [from the bench].

"I can't say what he said, but he said something like: 'I'm really happy'. But the coach must read the needs of the team.

"To develop the relationship we have with players with different characteristics [you must change sometimes], but it doesn't mean players can't be decisive."