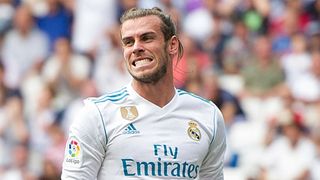 The Wales international has been targeted by sections of the Santiago Bernabeu support this season after some unconvincing displays.

Bale was subjected to more jeers on Wednesday, despite recording two assists in Madrid's 3-0 Champions League victory over APOEL.

Marcelo believes the former Tottenham star's injury concerns are behind him, but suggested his morale has been affected.

"Of course we're worried," he told a news conference when asked about Bale. "The important thing is to know if he's happy or not. The person who is happy off the pitch is also happy on it.

"He got two assists. He doesn't look bad physically, but I'm a player, not a coach."

Marcelo was speaking after officially signing a new five-year contract with LaLiga and European champions.

The Brazil international says he feels like an academy product at the club, having been in the Spanish capital since 2007, and praised the influence and advice of former Madrid star Roberto Carlos.

"I'm immensely proud to be able to enter into the history of this huge club. I'm really happy to have had nearly 10 years here and now to renew my contract," he said.

"I would very much have liked to play for the Castilla. It would have been an honour to help Madrid in the youth academy. But I have that inside me; I feel like a youth-team player."

He added: "It's not normal for a player to behave as well as Roberto Carlos did; when I came it was to take his place. But I have learned a lot from him.

"He has helped me a lot and is still giving me advice. And besides being my idol, he's my friend."

Marcelo revealed he tries to give guidance to the young players at the club, but warned not to put too much pressure on the likes of Marco Asensio.

"Asensio has a bright future but I don't like talking about the youngsters because it's not good to create too many expectations," he said.

"Everyone thought I would be another Roberto Carlos and you've seen that I'm not."

Marcelo unsurprisingly added that Cristiano Ronaldo is the best team-mate he has had and identified a fellow Brazil star as his toughest opponent.

"I played with Ronaldo, Ronaldinho, [Ruud] Van Nistelrooy, but you know who the best is: Cristiano. He's the most complete," said the 29-year-old.

"The most difficult opponent is Neymar."