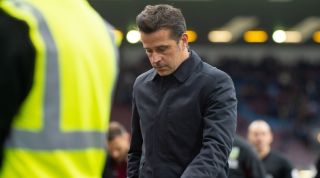 The Toffees have suffered a dreadful start to the season and the Portuguese risked the sack over the international break after losing four consecutive Premier League games.

A 1-0 setback away to Burnley last weekend followed losses to Manchester City, Sheffield United and Bournemouth.

It also left Everton in the relegation zone after picking up just seven points from their first eight league games.

According to the Star, Silva has been told he has three games to save his job.

A list of candidates who could replace him is yet to be compiled as the former Watford and Hull City boss looks to transform his side’s fortunes in their upcoming games against West Ham and Brighton in the Premier League and Watford in the League Cup.

Defeat in those matches, or an elimination from the cup, could spell the end for Silva, who has been in charge of the Merseyside club since the summer of 2018.

Sources close to the 42-year-old say that the he is confident that his team were going in the right direction before their recent slump and therefore he believes he will be able to get them back on track.

But he was told in no uncertain terms that his job is on the line during a recent meeting with the club’s majority shareholder Farhad Moshiri.

David Moyes has been linked with a return to the Goodison bench, but the Scot’s former employers have made no contact with him about the possibility.

Silva led Everton to an eighth-place finish in his first season in charge, while they were knocked out of the FA Cup at the fourth round and the League Cup at the third round stage.