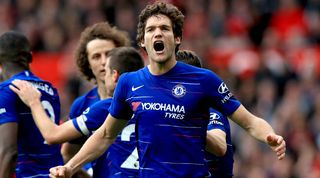 According to AS, Atletico have made replacing Lucas Hernandez and Filipe Luis a priority this summer.

Having forged good relations with Chelsea over recent years, Atletico are reportedly hoping that any deal for Alonso would be a smooth one.

Alavaro Morata made the same move only this January, Diego Costa returned to his former club a year earlier, and Luis spent a season at Chelsea in 2014/15 before being sold back to Atleti.

Alonso's relative success at Chelsea has gained him recognition with Spain at international level, which is thought to be something Atletico value.

The only stumbling block would be Chelsea's reluctance to sell while they can't buy, although the west Londoners are hoping for a favourable outcome when they appeal their transfer ban to the Court of Arbitration for Sport.