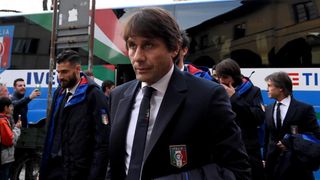 Conte went on to lead Juventus to three straight Serie A titles before moving on to coach Italy.

The Italian has already stated he will leave the post after Euro 2016 and has been widely reported to be the next Chelsea manager.

Marotta said he would be happy for Conte, should he complete the move.

"The fact Antonio Conte is going to Chelsea just confirms that we made a good choice when we took him from Siena," he said.

But Marotta said Conte's potential arrival at Chelsea would not hinder his efforts to keep Juan Cuadrado - who is at Juventus on loan from the Premier League champions - in Turin.

"But as for Cuadrado? I don't think Conte will influence our decision. We could keep him here," he said.

Cuadrado has been a hit at Juventus after a poor start to life at Chelsea.

Jose Mourinho plucked the Colombian from Fiorentina in January 2015 after he scored 11 goals in 32 league appearances in the Serie A in 2013-14.

He only managed 26 league minutes this season for Chelsea before moving on loan to Juventus, where he has three goals in 22 league outings.