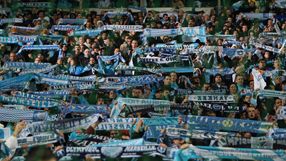 Olympique Marseille have decided not to boycott Sunday's Ligue 1 clash at Paris Saint-Germain despite the club's objections to a ban imposed last month on away fans attending matches between the arch-rivals this season.

"There was no problem. A boycott is out of the question and we won't send a reserve team," president Jean-Claude Dassier told the club's website after a meeting with Marseille fan associations.

Surprise leaders Brest are keeping their feet firmly on the ground ahead of a tricky trip to Lille on Sunday.

"We remain humble because we know everything goes fast in football," defender Omar Daf told the club's website.

Promoted Brest, enjoying their first season in the top flight since 1991, have 21 points from 11 games.

RC Lens will have to make do with the absence of the injured Tunisia forward Issam Jemaa as they host Montpellier on Sunday.

Jemaa said he picked up a knee injury that will keep him out of action for three months.

"I tore a muscle in my knee against Toulouse (last weekend)," Jemaaa told Lens's website.

St Etienne will be without the injured midfielder Blaise Matuidi when they entertain Lorient on Saturday.

"A scan showed that Blaise Matuidi is suffering from a muscle injury. He will be sidelined for about two weeks," St Etienne said on their website.

St Etienne lie fourth in the standings on 18 points from 11 games.

Defender Cedric Hengbart had been ruled out of Auxerre's trip to Sochaux on Saturday with a muscle injury, his coach Jean Fernandez said.

Auxerre, who had a miserable start to the season, now lie 11th and beat Ajax Amsterdam 2-1 in the Champions League on Wednesday, picking up their first points in the competition.

Hengbart is likely to be sidelined for a month.

French international Jeremie Toulalan could be taking part in Olympique Lyon's trip to Stade Rennes on Saturday after he returned to training this week.

Holding midfielder Toulalan missed two weeks of action because of a foot injury.

Lyon are 10th in the league on 15 points, four adrift of second-placed Rennes.