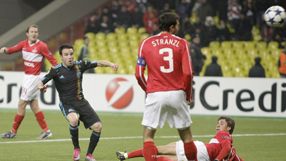 Marseille, who finished third in their group in each of the last three seasons, looked set to continue that pattern this year after losing their first two Group F matches, including a surprise 1-0 home defeat by Spartak in September's opener.

But the French champions have rebounded in style, scoring 10 goals in their last two games as they followed a record 7-0 away win at Zilina three weeks ago with another emphatic victory in Moscow.

"We knew it was a must-win game. We won it in spectacular fashion and they did not have many opportunities," Mathieu Valbuena, who opened the account with a great solo effort in the 18th minute, told French TV channel Canal Plus.

The diminutive France midfielder calmly collected the ball inside Spartak's penalty box with his back to the goal, made a 360-degree turn before firing a rising shot into the top corner that left keeper Andriy Dykan with no chance.

Loic Remy doubled the lead nine minutes after the break following a lucky bounce on the Luzhniki artificial pitch. The ball fell right into Remy's path following his initial attempt and he made no mistake with the second effort, hitting both goalposts with a low shot before it trickled over the line.

Brazilian striker Brandao sealed the points for Marseille midway through the second half when he beat Dykan with another low drive into the far corner from just outside the box to start early celebrations on the visitors' bench.

Marseille coach Didier Deschamps, captain of the side who won the inaugural Champions League in 1993, praised his team's fighting spirit.

"It's very satisfying to go through as it has been a long time since we last achieved this result," Deschamps, who captained France to World Cup victory in 1998, told reporters.

"I'm a happy coach tonight, happy for my players, the club and our fans. There has been a lot of pressure on the team recently and it has not always been positive. But the players lived up to the challenge which is the most important thing."

While the French celebrated, many Spartak fans left the arena highly disappointed at another missed opportunity.

The Muscovites, missing the creative force of injured playmaker Alex, suffered another huge blow to their attack when his Brazilian compatriot, striker Welliton, was sent off for pushing Souleymane Diawara in the 64th minute.

Spartak looked tired at the end of a long Russian season. They have failed to qualify for Europe's premier club competition next season after missing out on a top-three finish domestically this year.

"It was almost the same as we played against CSKA when we felt apart in the end," he said referring to a 3-1 defeat by their bitter city rivals at the weekend when they conceded three goals after the break.

Spartak will have the consolation of competing in the Europa League after being assured of finishing third in the group following Chelsea's 2-1 win over bottom-of-the-table Zilina.