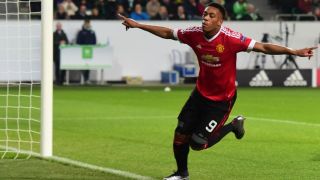 Eyebrows were raised when United splashed out a reported £36million to sign the French striker from Monaco, with the fee set to rise over Martial's time with the Red Devils.

However, the 20-year-old has so far netted eight goals in 23 appearances in all competitions and Van Gaal is over the moon with his progress.

"I am very pleased with how Anthony is developing himself, which is why he always plays, more than I had imagined before," Van Gaal told the United website.

"I could not predict that he would play almost every match because when you are 19 years old [when he joined] the rhythm of the Premier League is exceptional, which is why I am very pleased with him."

Van Gaal welcomed back Adnan Januzaj at Old Trafford this week after his season-long loan spell with Borussia Dortmund was cut short and the Dutchman has urged the Belgian youngster to follow Martial's example.

"In the same way as Martial, Adnan has to do it for himself," Van Gaal added.

"However, I have talked with Adnan, saying that I believe in him and I want to help him, he has to do it himself.