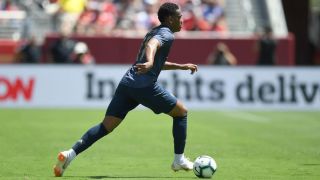 Jose Mourinho has confirmed Anthony Martial has left Manchester United's tour of the United States to attend the birth of his second child in Paris.

Martial has been strongly linked with a move away from the club after his agent claimed he wanted a move, with the France international reported to have a strained relationship with Mourinho.

It was speculated on Wednesday that Martial would be returning home but later Mourinho confirmed his departure was not due to transfer rumours.

"I found out that Martial was going to Paris when he told me," Mourinho told reporters after United's 1-1 International Champions Cup game with AC Milan, which they ultimately won 9-8 on penalties.

"It was two or three days ago. When it is personal reasons, everyone analyses that the way they think is the correct way.

The shoot-out victory over Milan was United's first ICC contest of the year and, following a couple of unimpressive draws with Club America and San Jose Earthquakes, Mourinho was happy with how things went.

"We played in a system [3-5-2 formation] we don't play many, many times, so it's good experience too.

"We made a couple of defensive mistakes, but with the ball we were dangerous, especially when fresh, our problem at the moment is to play 90 minutes, but for 65 minutes we were very good.

"We had a chance not to just score goals but score beautiful goals; the counter with Ander [Herrera] in the first half and Alexis [Sanchez] in the second.