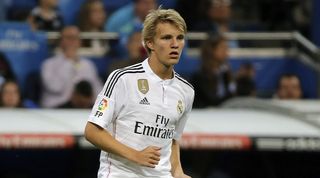 The Spanish giants completed the signing of a then-16-year-old Odegaard in January 2015.

The midfielder arrived at the Bernabeu with a lofty reputation having made his senior international debut aged 15, and it has now been alleged that Madrid offered the player's father a lucrative role in order to smooth the deal.

Norwegian outlet VG claims to have seen documents from Football Leaks which show that Hans Erik Odegaard received a contract worth around £2.7m on the same day that his son joined los Blancos.

Odegaard Sr. was offered a role as assistant coach of Madrid's Under-11s, but the salary was around 10 times higher than the usual rate.

He had previously been working as a coach at Mjondalen, a club which was not even competing in Norway's top flight at the time.

Odegaard Jr., who turns 21 in December, is currently on loan at Real Sociedad having failed to secure a regular spot in the Madrid first team.