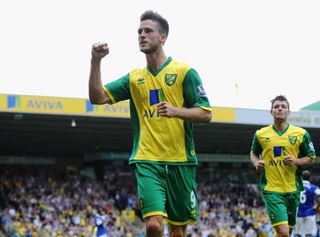 The Netherlands international did not have much service throughout the match, but made the most of what he was given to deny Martinez a win in his first competitive game as Everton boss, as the two sides ended 2-2 at Carrow Road.

The former Sporting Lisbon man rescued a point for the hosts after Norwich had fallen behind 2-1, heading home Steven Whittaker's skewed shot.

And his performance was enough to catch the eye of opposition manager Martinez, who looked to have a first Everton win in the bag following efforts from Ross Barkley and Seamus Coleman.

"If you’re a striker and you get very few chances and you take them, it speaks volumes about yourself," said the former Wigan Athletic boss. "Scoring on your debut for a new club as a striker is important.

"I thought his movement was very good, but we kept him quiet for much of the match.

"But then, scoring that chance shows he has a good sense of being in the right place at the right time."

Van Wolfswinkel, who agreed a club-record move to Norwich in March, scored 20 goals in 41 appearances for Sporting Lisbon last term.