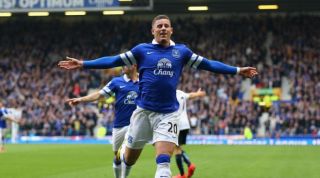 Martinez's insistences are at odds with previous comments, in which he claimed that the England international would be "out for a long, long time" and that he could be sidelined for "between seven weeks and four and five months."

But while Martinez did not feel Barkley would miss that long, he acknowledged that he is unsure about the progression of the player's troublesome knee.

A positive for Everton fans was the 20-year-old's response to treatment, though, as they look to improve on last term's fifth-place finish.

"I don't know where the figure of five months came from but obviously the extent of the injury is a little unsure at the moment because we don't know how the next two weeks are going to develop.

"It's a medial ligament injury and we know that Ross, in terms of the power and the strength that he has in his body, he could easily react to treatment a lot better than other players.

"The length that Ross will be out is a little uncertain at the moment and it could be anything between the eight weeks that we mentioned or a little further.

"Until the end of the week, or probably the next 10 days, we won't know how the knee is progressing and how quickly Ross can be back."

Martinez added that further updates on Barkley's condition could be expected in the coming days.

Better news surrounded the fitness of Seamus Coleman, who is now ready to start games after overcoming a hamstring issue, while Martinez also said that Darron Gibson [knee] is progressing well.

"Seamus was fully fit from a medical point of view on Saturday [he came on as a late substitute in a 2-2 draw at Leicester City] and that was a real boost," the Spaniard added.

"He has been working really well, and he was desperate to be part of the squad on Saturday.

"I think now it's fair to say that he's considered fully fit and ready to join the group and help the team in any game.

"Darron is working really well and is building some better fitness levels. We need to make sure after a long spell on the sidelines that all the work we are doing is allowing him to be fully fit.

"It's going to be a very, very busy period in September and everything is working towards that month where Darron can be fully fit and he can have a really good period on the pitch, so it's not a problem at all with Darron."