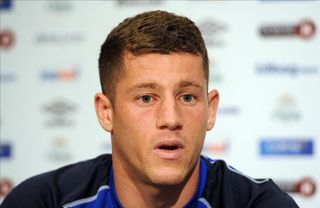 England manager Roy Hodgson stated his belief that there are elements of Barkley's game that are similar to former Tottenham and Lazio midfielder Gascoigne, who is much revered figure having played over 50 times for his country.

And Martinez believes the 20-year-old should relish Hodgson's comparison rather than feel burdened.

"We spoke a lot about Ross," Martinez said ahead of Everton's Premier League visit to Sunderland on Sunday. "He is very unique footballer and will draw those comparisons. He can bring memories of many different footballers.

"It is a phenomenal compliment to him for someone to say they see parts of Paul Gascoigne in Ross.

"The young players need understanding at this point in their careers. They need guidance and support of the older players, but he is a great talent."

Everton head to Sunderland on the back of a 3-0 victory over Lille in the UEFA Europa League on Thursday.

Martinez confirmed that late fitness checks will be given to Gareth Barry and Seamus Coleman ahead of the clash at the Stadium of Light, while he hopes Kevin Mirallas can step up his recovery from a hamstring injury during the upcoming international break.

"We're looking forward to the next two weeks, it's a good period for Kevin," he added.

"He's stepped up his work, it's a case of two to three weeks, but for a sprinter it's difficult to put a timescale on a return. [But] he's looking really, really good to start playing before the turn of the year."