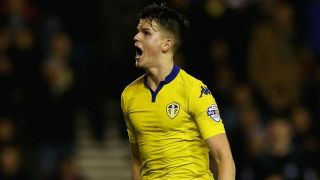 Roberto Martinez says Sam Byram's failed transfer to Everton was not the right move for the player or the club.

Byram joined West Ham on a four-and-a-half-year deal on Wednesday having turned down a proposed switch to Goodison Park.

Everton were reported to have agreed a £3.million deal for the right-back, who can also play on the right-hand side of midfield, with Byram said to have been swayed towards Upton Park by the prospect of more regular football.

Speaking in his pre-match media conference ahead of Sunday's game with Swansea City, Martinez said: "Sam's situation was one where, as on many occasions, we were first to identify a good player in the Championship.

"We went through the correct procedures, established a good relationship with Leeds, but in the end it was not the right move for Sam or the right player for us and that was the end of it for us.

"I am pleased we were at the forefront of identifying a player but it was not for us. I can always give a correct path for a youngster to fulfil their potential but it wasn't right to bring a young talent in for the sake of it.

"It was not right for him and it wasn't a challenge he could embrace."