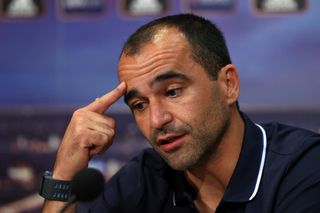 The Belgium international enjoyed a productive season on loan at Goodison Park from Chelsea in 2013-14, scoring 15 Premier League goals in 31 appearances as Everton finished fifth.

Lukaku then travelled to the World Cup with his national team, where they reached the quarter-finals before losing out to Argentina.

In July, Everton acquired the forward on a permanent basis for a club-record fee of £28 million, but the 21-year-old has made something of a slow start to the new campaign with two goals in 10 appearances in all competitions so far.

In a press conference on Thursday Martinez conceded that the Belgian was taking time to recover from the World Cup, but insisted that resting him was not the solution.

"Romelu is still finding his best moment of form and any player that comes back from the World Cup takes a bit of a transitional period," he said.

"I think Rom has done incredible to make himself available for the games we had. He's played a lot of games, and probably his desire to help the team has stopped him from concentrating on being fully fit.

"Over the next few weeks we'll try to give him that physical element that he needs. When you come back from the World Cup you need to recover from the previous season.

"I think now Rom needs to play and get his match fitness and he's too important for us. We can't afford to give him a resting period and I don't think that would help him.

"I think now he's got a good level of fitness through the games he's played, so it's a responsibility we've got at the club that we get him fully fit so he can enjoy his football.

"What I love about Rom is his attitude. He wants to be on the pitch, he wants to help the team and he'll accept any moments of form so that he can get through it."