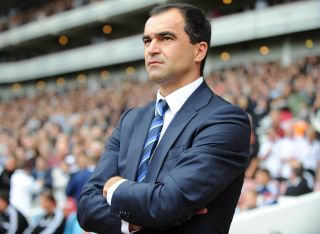 The Merseyside outfit have tasted defeat just once in the Premier League this season in a 3-1 reverse away to Manchester City before the international break.

And Martinez feels his team are capable of mounting a sustained challenge to feature in Europe's premier club competition, despite the competitiveness of the Premier League.

"I think it shows you there are six teams that are expected to be fighting for the Champions League spots," he said.

"Any team that wants to break into those four positions is going to need an important effort.

"In the same manner, I'm looking at the six points we dropped with the three draws, when we were really good in everything that we did, and six points would make a real big difference. We have to be as good as we can be (to challenge).

"I think the squad is ready to be pushed, is ready to challenge each other and is ready to hit good heights. That's what we will do, we will become better and stronger.

"Once we get around March, April, we're going to know where we are and what we can fight for in the league."

Martinez has once again faced questions on the future of full-back Leighton Baines, with the Spaniard insisting there are no plans in the pipeline over a new contract for the England international, who was a reported target for Manchester United during the close-season.

But he insists the sole focus is on how the 28-year-old performs on the pitch.

He added: "There's no train of thought on that at the moment. All that matters is that Leighton is enjoying his football and that's the only thing that I'm focusing on.

"At the moment, all that matters is to see Leighton fully fit, enjoying his football, increasing his personal stats."