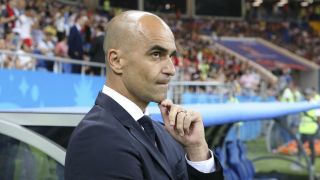 Belgium coach Roberto Martinez is fully focused on facing Brazil in the quarter-finals of the World Cup amid speculation he is a contender to take over Spain.

Martinez led Belgium into the last eight at Russia 2018 despite a wobble in the last 16, his side coming from 2-0 down against Japan thanks to Nacer Chadli's last-gasp winner.

Spain sensationally sacked Julen Lopetegui on the eve of the World Cup after the coach confirmed he was leaving after the tournament to take charge at Real Madrid.

Fernando Hierro was appointed as an interim replacement but is not expected to stay on after Spain suffered a surprise last-16 exit against hosts Russia on penalties.

Reports have indicated Martinez is one of the names on the Royal Spanish Football Federation's (RFEF) shortlist, but the former Everton manager would not to be drawn on the rumours.

"I understand the question that’s your job and you have to do it," Martinez told reporters ahead of Friday's quarter-final.

"But the only thing matters is the quarter-final of the World Cup.

"If you look for a game you want in a World Cup it's Brazil.

"In terms of excitement, quality, winning mentality, as you can imagine the only thing that matters is Brazil and the quarter-final."

Former Barcelona coach Luis Enrique, Michel and Quique Sanchez Flores - most recently of Espanyol - are among the other names reportedly on the RFEF's shortlist.