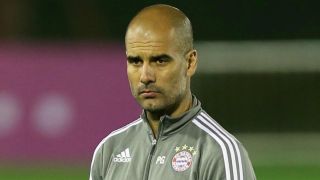 Everton boss Roberto Martinez has hailed Pep Guardiola's intention to move to the Premier League as "a phenomenal sign" for English football.

The Bayern Munich boss has confirmed he plans to take up a role in England's top flight after his contract with the Bundesliga champions expires at the end of the season.

Manchester City, Manchester United, Arsenal and Chelsea are widely considered to be vying for the former Barcelona boss's signature but Martinez feels he will give the game a lift wherever he chooses to go.

"To see a manager of this standard is a phenomenal sign," he said on Friday. "It's going to be a terrific addition to the league.

"As a manager he's unique, he's a modern manager who chooses total football something like Cruyff, he has chosen a clear way of playing, and like Johann Cruyff he sticks to his principles.

"It's good news, to be more competitive and the best league in football. It will be great for football in general."

Turning to Everton's business in the transfer window, Martinez insists the club will not be forced into selling any of their biggest names but revealed there have been approaches for midfield duo Darron Gibson and Aiden McGeady.

"We have a lot of interest in Gibson and McGeady. We need to consider next step carefully. They have not had enough minutes and need to be active," he said. "We are going to look into it.

"We don't rely on selling players to balance the books. We will make football decisions from window to window to make sure we are a stronger team."

Everton have already completed the signing of Switzerland youth international Shani Tarashaj this month and Martinez is excited by his talent.

"He's really clever. He plays in between the lines, has an eye for goal and will fit in really well to the way we want to play at this club," he said of Tarashaj, who has returned to Grasshopper Zurich on loan.

"He is one of the best Swiss talents, a really good signing for us. We have a good relationship with Grasshoppers."

Looking ahead to the FA Cup third-round clash with Dagenham & Redbridge, Martinez confirmed that club captain Phil Jagielka is ready to make a welcome return.

"Jagielka is ready to start, it has been a big boost – huge. It is huge just to have him around the dressing room, his presence is a real calming influence," he added.

Romelu Lukaku, Tom Cleverley and Seamus Coleman will all miss the game due to injury.